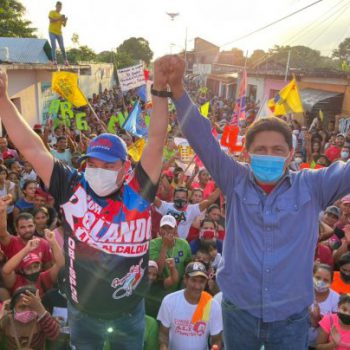 The Supreme Court ordered that the governor election be repeated in Barinas state on Monday and barred the opposition candidate from running again.

Speaking Sunday, the president extended an invitation to a “good yield” of elected opposition governors and mayors to visit the Presidential Palace and discuss “specific problems in their states and municipalities.” Among those invited was Manuel Rosales, who ran against Maduro’s predecessor Hugo Chávez in 2006 and was re-elected to Zulia state governor last Sunday.

Maduro also took the opportunity to encourage leftwing forces to “forgive everything we have to forgive” and “unite,” announcing a pact to “rectify and re-found the revolution.” Beyond asking to win and losing government candidates to sign it, the president offered no details on the purported agreement. Recently, government policies have been the subject of fierce debate and criticism both within the ranks of the ruling United Socialist Party (PSUV) and from other leftist forces.

Pro-government forces won 19 of the 22 governorships, with one left to decide, and 63% of mayoralties in Sunday’s “mega-elections,” as well as similar majorities of regional legislators and local councilors. The PSUV, however, won only 46% of the total votes cast. It is the first time that the ruling party has failed to win a majority of votes since 2015.

The hard-right Democratic Unity Roundtable (MUD) and more moderate democratic Alliance won 26% and 16% of the total votes, taking two and one governorships, respectively. Likewise, a handful of independent opposition candidates recorded larger-than-expected results, such as the Neighborhood Force party. National Electoral Council (CNE) data indicates that unified opposition efforts may have defeated PSUV candidates in as many as fifteen additional states.