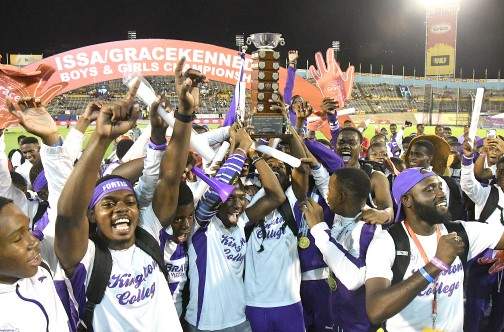 The school, which will celebrates its 97th anniversary on April 16, amassed 372 points, convincingly ahead of Jamaica College (JC) on 300.83 points.

Calabar High finished third on 170 points, holding off the spirited challenge of St Jago High who were fourth on 147. Edwin Allen High were fifth with 95 points.

KC are in a purple patch right now, having won the urban area Manning Cup and the all-island Olivier Shield football titles earlier this year.

The ‘Purples’, who won their first Boys’ Championships title in 1937, are the most successful team in the history of the 112-year-old competition.

It was really a battle between two schools rich in history. JC have as its school crest two mythical yellow creatures called griffins, which are known for guarding treasures and priceless possessions with their beady red eyes, while KC’s crest has a dog, the animal of loyalty, fidelity and watchfulness.

But under the watchful eyes of the griffins, the dog stole the Mortimer Geddes trophy from Old Hope Road in a dominant, all-round display and raced to North Street where the celebration will continue for weeks.