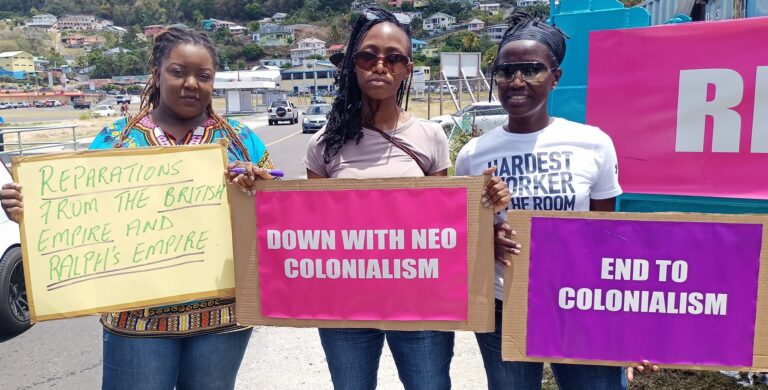 On Saturday morning, as Prince Edward and his wife Sophie began their tour of duty in the former British colony, multiple protests greeted the royal couple.

As scrutiny of the British Empire’s colonial legacy grows, activists protested at the three major stops of the Royal Subjects.

A slavery protester shouted, “Apology now, reparations now” at the entrance to the Diamond Athletic Track where Edward was whistled past to meet with athletes preparing for the Commonwealth Games.

Lawyer Jomo Thomas, a longtime advocate for reparations, was among the protesters.

Thomas said, “We are here to demand reparations and an apology for the genocide committed against our foreparents.

“Edward and his British entourage should not be feted in our land. Paramount Chief Chatoyer turns in his grave, Commander Duvalier cringes, and those ancestors corralled and exiled look on in horror as our neo-colonial leaders lay down the red carpet for the invaders”.

Afterwards, protesters moved to the outskirts of Arnos Vale sports Complex where Prince Edward was meeting with female cricketers and watching an exhibition game of 10/10 cricket.