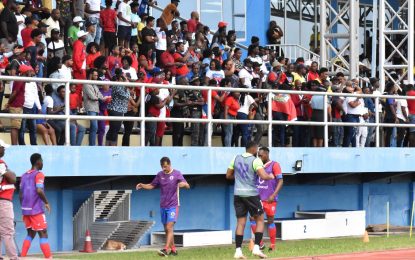 Playing at the Leonora Track and Field Facility in the League B encounter, Haiti secured their 3-points from a 2 – 6 drubbing to move on to seven points, overtaking Guyana, whose six points have them in second.
Haiti was led by a double from Derrick Etienne Jr, but it was an all-round team effort from the Haitians with goals being scored by Dany Jean (4’), Steven Saba (9’), Carney Antoine (38’), and substitute, Fredler Christophe (80’).
Guyana’s two goals were scored by Emery Welshman (11’) and Nathan Moriah-Welsh (44’).
The Golden Jaguars faced an entirely different class of opponent yesterday, but what was immediately noticeable was Guyana’s starting XI that excluded the team’s best defender, Quincy Adams, and midfielder Stephan Duke-McKenna.

The match started with the Haitian offense exposing the center-back, Matthew Briggs, who opened instead of Adams. That led to Jean drawing first blood in the fourth minute before Sada took the same route to make it a two-possession game.
Two minutes later Guyana was able to put together crucial passes near the opposition’s 18-yard box and pull one back with a shot off Welshman’s boot.
A few moments later Welshman squandered the chance to equalize after putting too much flare on an attempted bicycle kick during a goalmouth scrimmage. The forward had enough time to control the ball before his attempt but Guyana’s communication on the field throughout the match was little to none in warranted scenarios. There wasn’t much support from players near goal either.
However, Haiti kept its foot on the gas even though snippets of Guyana’s chances resulted in an often break in their defense. Antoine added a bit more misery to the list for the host team when Antoine took the score to 1 – 3.