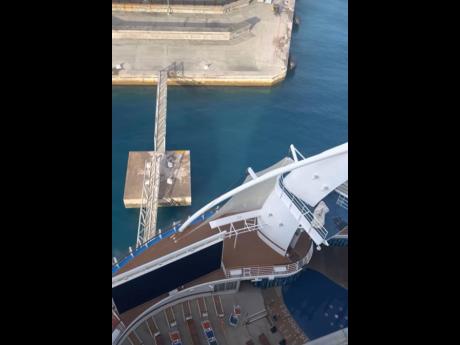 As Bartlett points to pilot error, PAJ cautions against a hasty conclusion

By webmaster KeithMay 28, 2022No Comments

Tourism Minister Edmund Bartlett yesterday blamed pilot error for Thursday morning’s incident in which Royal Caribbean’s Harmony of the Seas cruise vessel crashed into the dock at Historic Falmouth in Trelawny, but the Port Authority of Jamaica (PAJ) has slammed any such utterances as premature.

The Oasis-class Harmony of the Seas, the world’s third-largest cruise ship, hit a mooring dolphin as it approached the port, resulting in what has been determined to be minor damage to the vessel.

In a release yesterday, the PAJ noted that the mooring dolphin was displaced and will require reconstruction, adding that its engineers were doing further assessments of the damage to determine how repairs would be effected. It remains unclear as to who will foot the bill for the repairs as Section 8 of the country’s Pilotage Act states that the PAJ is “not liable for loss caused by pilot or apprentice”.

But speaking with The Gleaner yesterday at the opening of the Edward Seaga Suite at Devon House in St Andrew and the relaunching of the Devon Duppy Rum, Bartlett said that repairs were underway.

“We are repairing the damaged areas at the port now. The divers are there now recovering the broken elements and we should be back in full order for the ships that come next week,” he said, blaming the incident on pilot error.