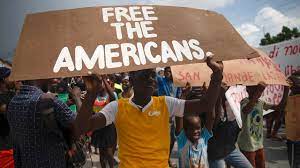 MILLERSBURG, Ohio (WJW) – It’s been nearly two weeks since 17 people affiliated with a Northeast Ohio missionary group were kidnapped in Haiti, and so far, efforts to negotiate with the gang holding the missionaries hostage have failed to win their release.

It was on Oct. 16 that the 17 missionaries, which includes five children, were kidnapped by a street gang after leaving an orphanage outside Port-Au-Prince.

The hostages are affiliated with Christian Aid Ministries, based in Millersburg in Holmes County. The group provides a channel for the Amish and Mennonite communities to do charity work in troubled areas of the world.

On Thursday, Christian Aid Ministries issued a new statement about the mass kidnapping of the missionaries.

The statement reads in part: “As we approach the two-week mark, we continue to pray that God would protect the hostages and give them the grace to respond with Christ-like love in the face of evil. We pray for the kidnappers, that God would soften their hearts and draw them to himself. Our prayers are also with the families as they wait day after day for the release of their loved ones”

The Haitian gang that kidnapped the 17 hostages is known as 400 Mawozo and is demanding $17 million for their release.

See the entire article at: Fox8